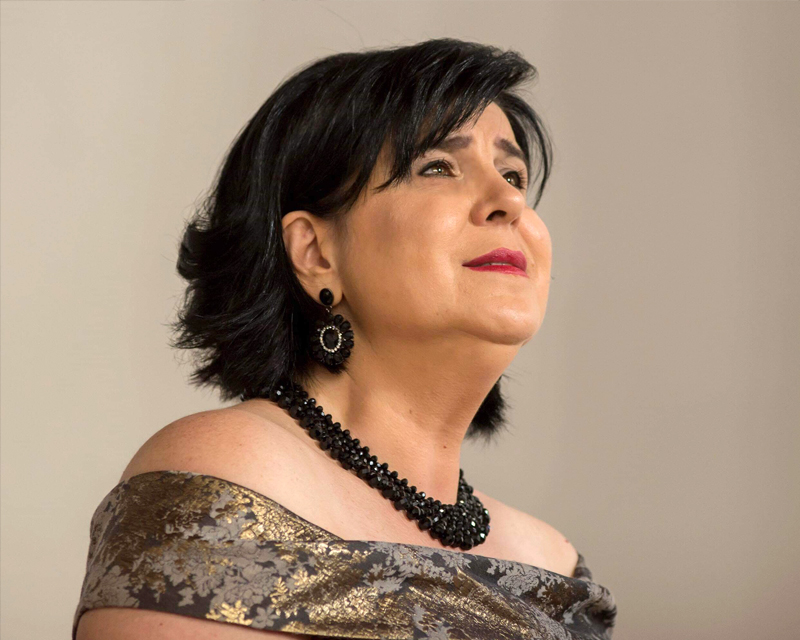 Born in Gotse Delchev, Mariana Karpatova graduated from the Lyubomir Pipkov Music School in Sofia. She continued her training as a student of Prof. Mati Pincas and Mila Dyulgerova at the Prof. Pancho Vladigerov National Music Academy in the Bulgarian capital, and later the Juilliard School Opera Center in New York.

While still a student at Juilliard, Mariana appeared on the Live from Lincoln Center broadcast of Maurice Sendak’s new production of Hänsel und Gretel in the dual role of the Mother and the Witch, and made an impressive debut as Rosa Mamai in L’arlesiana at the Sarasota Opera in the United States. She went on to make her Lincoln Center recital debut at Alice Tully Hall as the recipient of the Alice Tully Vocal Arts Debut Award.

Highlights of her opera appearances include Cuniza in Oberto at the Sarasota Opera, Mistress Quickly in Falstaff at the Michigan Opera, Magd in Elektra at the Metropolitan Opera, Alisa in Lucia di Lammermoor and Berta in The Barber of Seville at the New Jersey State Opera, Larina in Eugene Onegin at the Baltimore Opera, The Maid in Jenůfa and Cieska in Gianni Schicchi at The Spoleto Festival USA, Zita in Gianni Schicchi and The Princess in Suor Angelica at Opera Tampa, Brucha in The Woman at Otowi Crossing at the Opera Theater of St. Louis, Olga in Eugene Onegin at the Palm Beach Opera, Azucena in Il Trovatore at the Bulgarian National Opera, among others.

On the concert stage, Ms. Karpatova has appeared at the Lincoln Center in New York, the Kennedy Center in Washington DC, The Spoleto Festival USA in Charleston, as well as with the National Symphony Orchestra of Mexico and other philharmonic orchestras.

In 2018, Mariana Karpatova co-founded the Off the Beaten Path Chamber Music Festival in Kovachevitsa, not far from her native Gotse Delchev. In addition to her artistic and organizational contribution to the festival, she has also initiated a number of music events for the public at large, as well as vocal training opportunities for young people in the region. She has also taken part in the campaign to restore the historic building of the cultural center in Kovachevitsa, and other charitable causes.

Ms. Karpatova is on the board of Opera at Florham in New Jersey, and the narrator for their opera concerts. In the 2021-22 season, she has appeared in the Opera at Florham Holiday Concert, the Bulgarian Concert Evenings in New York Gala Concert at Carnegie’s Weill Hall, as well as in their concert series. Her forthcoming engagements this year include debuting as Florence Pike in Albert Herring at the Princeton Festival, and an appearance with the Columbus Symphony Orchestra.

Mariana Karpatova teaches at Fairleigh Dickinson University, Florham Campus, and in her own Mariana Voice Studio in Madison, NJ.